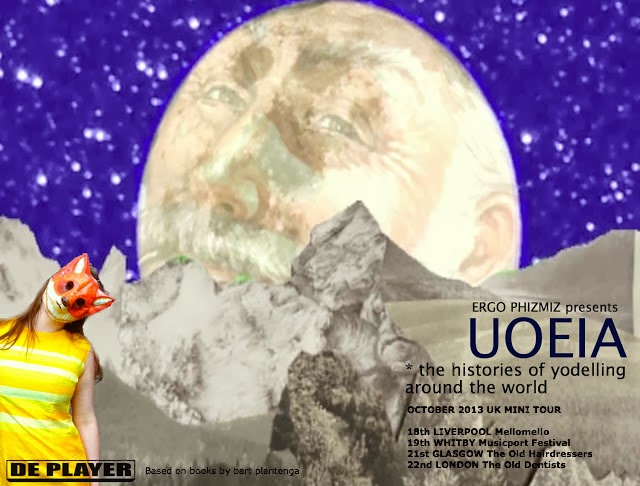 Mondays on Basic FM at 1550 throughout October.
A 30 minute mix of yodels and related yelps, wails and ululations from around the world, created exclusively for Basic FM in the run-up to the UK of “UOEIA * favola in jodel” an electronic operina on the histories of yodelling by Swiss Family Phizmiz, based on books by Bart Plantenga.
Starring Popeye, Johnny Weissmuller, Kishore Kumar, W.C. Fields, Alice Babs, Shirley Temple, Harry Torrani, Swiss Appenzeller yodelling, Berceuse Pygmy Yodel, Krimanchuli Orera, Erich Von Stroheim & The Great Gabbo, Johann Strauss II, and Swedish Kulning (cattle-calling).
Many of these tracks are sourced from Bart Plantenga’s “Yodel in Hi-Fi” playlist, which can be found here
“UOEIA” is a production of DePlayer

UOEIA * the histories of yodelling around the world * mini-tour

UK mini-tour October 2013
18th LIVERPOOL Mellomello Buy Tickets Facebook Event page
19th WHITBY Musicport Festival
21st GLASGOW The Old Hairdresser’s Buy Tickets Facebook Event page
22nd LONDON The Old Dentist’s (33 Chatsworth Road) Ticket link soon
A production of DePlayer, based on books by Bart Plantenga.
Yodelling: the crack in the human voice when pushed to its limit, the plaintive wail of man against mountains. From the Pygmy tribes in the jungles of Africa, to the mountains of Switzerland, or the plains of the Wild West, to frantic Persian ululations and yelps, yodelling is a worldwide phenomenon that betrays its perceived image as a benchmark of kitsch.
In “UOEIA: Favola in Jodel”, Ergo Phizmiz presents the history of yodelling through music, masks, puppetry, collage, and animation. Based on the books “Yodel in Hi-Fi” and “Yodel-Ay-Eee-Ooo” by Bart Plantenga, and performed by Swiss Family Phizmiz, UOEIA invites you through time and culture, yodelling from cavemen to the modern age.
“A truly charming production that does display the mystery & wonder of this most extreme & eccentric of vocals that allow us like chant or mantra access to other realms of existence” – Bart Plantenga, author of “Yodel-Ay-Ee-Ooo” and “Yodel in Hi-Fi”
Posted by Ergo Phizmiz at 07:11