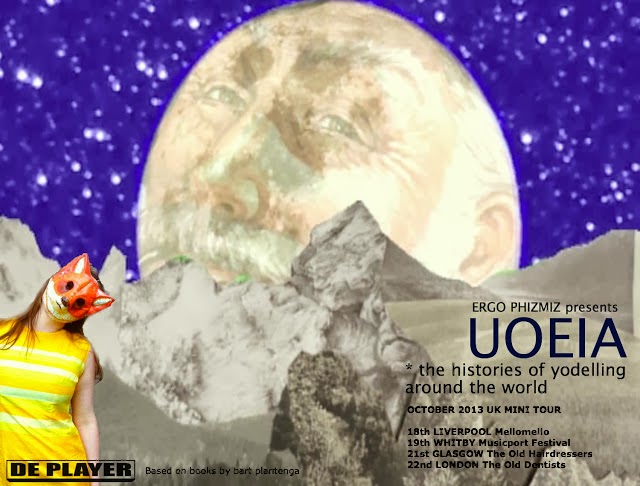 UOEIA
* the histories of yodelling around the world

Ergo Phizmiz is one of the most prolific artists in the world. Over the past 13 years he has created a body of work of hundreds of hours across theatre, songwriting, text, electronic music, collage exhibitions, installations, opera, video, and radioplays that has constantly defied categorisation and been performed or broadcast all over the world.

His work has included "The Faust Cycle" (a 15 hour audio adventure); "M: 1000 Year Mix" (a collage spanning a millennium), the unique operas "Gala", "Gargantua", "The Mourning Show", "UOEIA" and "Fulcanelli's Shoes"; the songwriting albums "Things to Do and Make" and "Eleven Songs"; his cover-versions of music by Beyonce, the Velvet Underground, Aphex Twin, and the Pet Shop Boys; and award-winning radioplays "Disappearing Boxes", "Conversations With Birds", "Paul Klee, a Balloon, the Moon, Music and Me", and "Boojum".

Ergo has been a prominent figure in the Creative Commons music world for almost ten years, and has given away vast troves of his work online, which has become very popular with video-makers internationally (Youtube alone now features over 1500 videos with Ergo Phizmiz music). He has also composed film and television scores for Vicki Bennett / People Like Us, Christian Marclay, and Frankie Boyle.

The work of Ergo Phizmiz is characterised by restless change and playful toying with history, art, music, science, and the limits between creativity and charlatanism, copyrights and copywrongs, words and music.

He lives in Bridport, UK.