The UK touring production of "UOEIA * the histories of yodelling around the world" previewed in Bridport on October 15th 2013. It's now safely packed into a suitcase and waiting for its adventures, which begin tomorrow.

Tickets for the shows are available below the image. Some of the venues are very limited capacity, so book early to avoid disappointment! Yodellayyeeeooooo....

"Cross-media (think puppetry, animation, music, and God-knows-what-else) history of yodelling – taking you from its knuckle-dragging caveman beginnings right through to the present day. Pretty unmissable". SevenStreets.com 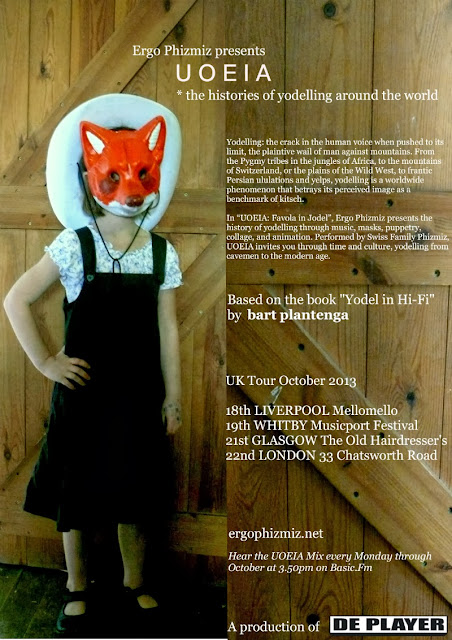 UOEIA
* the histories of yodelling around the world
by ERGO PHIZMIZ

For sale on the UK tour of "UOEIA", a special cassette-only edition in 50 copies of "UOEIA * the histories of yodelling".
If you can't make it to any of the shows and would like to reserve a copy of this cassette, send £7 over Paypal to ergophizmiz at gmail dot com and we'll keep it aside for you then post off next week.

Mondays on Basic FM at 1550 throughout October.
A 30 minute mix of yodels and related yelps, wails and ululations from around the world, created exclusively for Basic FM in the run-up to the UK of “UOEIA * favola in jodel” an electronic operina on the histories of yodelling by Swiss Family Phizmiz, based on books by Bart Plantenga.
Starring Popeye, Johnny Weissmuller, Kishore Kumar, W.C. Fields, Alice Babs, Shirley Temple, Harry Torrani, Swiss Appenzeller yodelling, Berceuse Pygmy Yodel, Krimanchuli Orera, Erich Von Stroheim & The Great Gabbo, Johann Strauss II, and Swedish Kulning (cattle-calling).
Many of these tracks are sourced from Bart Plantenga’s “Yodel in Hi-Fi” playlist, which can be found here