Out now on DePlayer, in an edition of 200, "Public Sound #3: Yodelling", featuring a publication of the libretto for Ergo Phizmiz's "UOEIA: Favola in Jodel" and a green vinyl featuring, among other treats, an 8 minute edit of UOEIA. Add into that combination a new essay by Bart Plantenga, a yodeling score by Myriam van Imschoot, and recordings from Phil Minton, and Doreen Kutzke & Myriam Van Imschoot, then you have a package of yodeltastic stuff that's very lovely indeed. 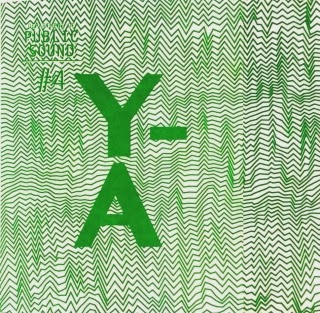 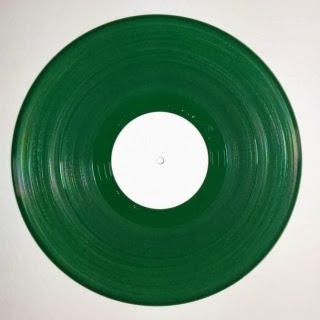 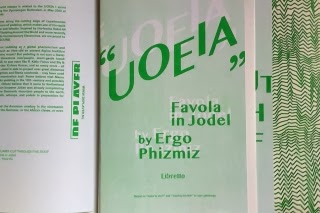 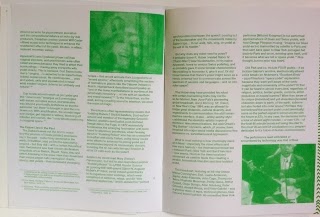 From the marvellous folks of DePlayer ....
"This Dept. of Public Sound release is related to the UOEIA I event by DE PLAYER, during Operadagen Rotterdam in May 2013 at BAR, Rotterdam, The Netherlands.
With soundtracks by Phil Minton, Ergo Phizmiz and Myriam van Imschoot & Doreen Kutzke on a 10" green vinyl/33 rpm.
Includes printwork containg an article on yodeling and avant garde by bart plantenga, a libretto by Ergo Phizmiz of his yodel operina UOEIA and a musical score of her piece Hola Hu by Myriam van Imschoot.
UOEIA is a program that moves at the cutting edge of experimental sound/music and the phenomenon of yodeling; makes use of the rapid alternation between chest voice to falsetto. Inspired by the books Yodel-AY-EE-OOOO: The Secret History of Yodeling Around the World and more recently, Yodel in Hi-Fi, From Kitsch Folk to Contemporary Electronica, we are proud to bring you the second edition of UOEIA. These books focus on yodeling as a global phenomenon and answer the question: How did an ancient tradition from the Alps find its way into American country music? Yodeling is not just a Swiss thing. From African Pygmies, rhinestone cow-people, avant-garde tonsil-twisters, and Nazi Jugend SS, to pop stars like R. Kelly and Sly & the Family Stone to Bollywood star Kishore Kumar, and many more – all have made use of the yodel. Yodeling projects over great distances, and Tibetan monks, like Swiss cowherds, may have used them for centuries as a communication tool. Explorer Marco Polo may have heard them yodeling in the 13th century. Through him yodeling reached the Alps and from there in the nineteenth century it also reached the American cowboys."
Buy this at DePlayer. 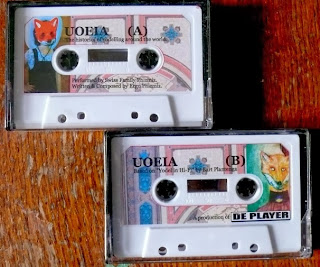 .... from an edition of 50, a full recording of Swiss Family Phizmiz performing "UOEIA".

You can buy the cassette here.