Reporting from the underneath of Grindia Studios, Bridport, is artist, actor, composer and raconteur Vulnavia Vanity, who plays the Protagonist in Ergo Phizmiz's "The Third Policeman".

Is it about a bicycle? 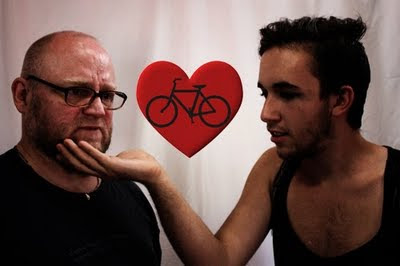 Of course it is. Why else would you be here were it not for the magnetic pull of the slender frame, the soft ring of the bell, the firm yet supple grip of the handlebars beneath your fingers, the hypnotic spin of the wheels?

Yes. The bicycle is truly a masterpiece crafted by the human hand, second only perhaps to the jam sandwich or the typewriter.
All this said, personally I have an irrational fear of riding a bicycle.

This stems from a traumatic experience in France when I was brave enough to mount a bicycle, only to discover that bicycle brakes are pretty damn strong, and when my little journey around the garden ceased to a halt, I fell onto the frame, crotch first.
My testicles bled.
It would give me copius amounts of pleasure to sail along the streets on a beautiful, vintage model with a little basket on the back to pick up bread from he boulangerie.
But I'm afraid this will never happen.
But at least The Third Policeman helps me live out my fantasies. 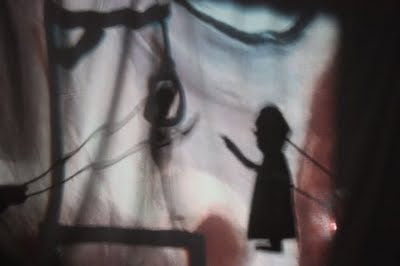 The rehearsal process has been very interesting thus far and has gone surprisingly smoothly, although we still have a terribly long way to go in four days.
This is a role unlike I have ever played before, in the sense that a great percentage of the show I am interacting with other characters who are just recorded voices.
I've been exploring my characterzation quite extensively over the last week or so and have eventually discovered the Protagonist's physicality. In a style almost reminiscent of Bouffon Clown, the Protagonist has his deformity (the wooden leg) and this completely compromises how he moves, his stance and also his attitude. This yonder photograph captures it rather well: 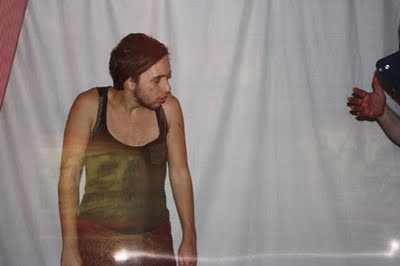 To finish, we have also been playing with shadow behind the projection and have discovered taken some quite lovely images. Look at Grandma Vulnavia for example: 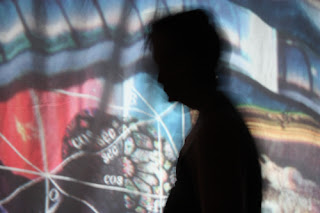 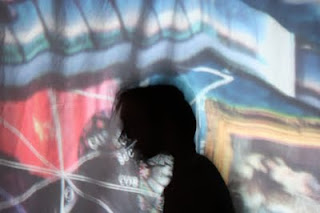 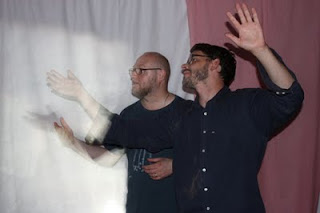 And we say a tender hello to a newly dead friend. 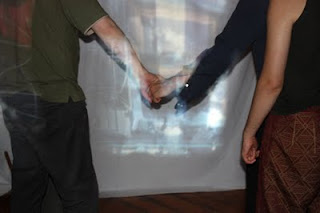 Nanu-Nanu & all that, lovelies ♥
And here is Vulnavia Vanity in his prime, with his rather splendid single "Worse Things Happen at Sea"....