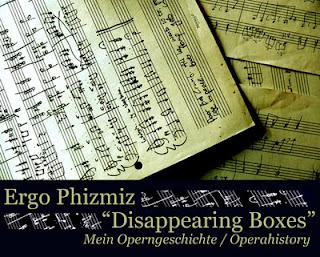 We're rather happy to tell you that Ergo Phizmiz's autobiographical radio piece "Disappearing Boxes" (created for Studio Akustische Kunst on WDR3) has recently been awarded Horspiel of the month by the Deutsche Akademie der Darstellenden Kunste.
You can read a (German language) review of the piece, and listen to a short extract at their website.
And here, by the wonder of Google translate, is some kind of approximation of what they're saying....
"Ergo Phizmiz is a 30th-rounder from the UK, which is in "Disappearing boxes" goes on the search for traces of his early career as an opera composer. Except for a few snippets of newspaper and a BBC interview from her only recording is received an overture. His whimsical, fictional auto opera story is about a shy boy who decides cheered on by his devotion to Monteverdi at the age of 10 years to compose operas - just as he was convinced of it as a four year old to be Popeye.

Without classical training was his musical training in hearing the same old pieces at home, playing the music student of his father every day during the organ lessons in endless variations. Coupled of course with the enthusiasm for technological options such as high-speed dubbing or multi-tracking, he opened the four-lane tape recorders and computers. His first opera, a farce, set in a pizzeria and the 13-year-old student with the school orchestra for the performance brought brought him dubious fame as the "Boy Genius". At age 16 he was already composing on again, stand-up comedian and was only returned on his multi-faceted musical experiments with 30 letter to the opera. Ergo Phizmiz is for his self-deprecating narrative, which is incidentally also as a brilliant deconstruction of the high-cultural genre of opera, a wonderful balance between text and music. Music is free for him to Lewis Carroll's "Auto-Boojum": it exists only when it is listed commits, so with each performance slow suicide. This fascination with the fleeting existence of music runs through the dazzling, from seemingly endless sources of dining and music sound collage that makes this a unique radio play, puzzle play acoustic."
Posted by Ergo Phizmiz at 01:53