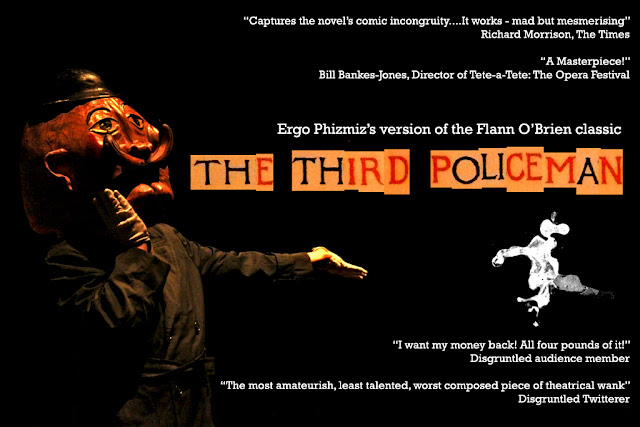 Well folks! We're back. "The Third Policeman" has premiered, much (very tired and rather intense) fun was had by all.

Audience so far have loved it and detested it, as indicated in the image above. Which is, of course, just the way we like it....

Today's issue of The Times featured a rather splendid review of the show, below... 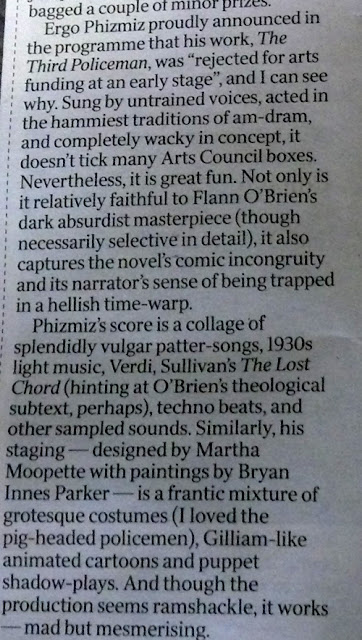 This link will take you to a photo gallery of images taken by Claire Shovelton (the above image is taken from Claire's gallery).

The lovely Tom Ravenscroft has also been drumming up support for the show, via his 6Music show where he featured a ten minute mix of songs and music from The Third Policeman, and in his New Statesman column, where he writes:

"You should probably expect to be at first a little startled - the music will be wildly unpredictable as I suspect will be his actions. I would be almost concerned if you had witnessed anything like it before. He is a burst of imagination, colour and noise, which has in the past left me sitting jaw collapsed on the floor, speechless as to how someone can so beautifully map out such madness."

And finally, today's blog would not be complete without this image of the Gang of Rogues a few minutes before going our separate ways. 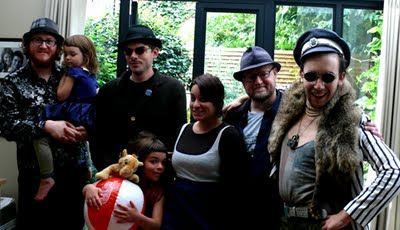 Many thanks to Caroline & Izzy, Bill, Anna, Nell and all the other lovelies of Tete-a-Tete...﻿
And let's not forget thanks to the Third Policeman team Erik Bumbledonk, Vulnavia Vanity, Oblivian Substanshall, Martha Moopette, Mike Wade, Bryan Innes Parker, Lucinda Guy, Talulah Lotus & Autumn Poppy. See you for more shows from October to December......
Posted by Ergo Phizmiz at 08:02