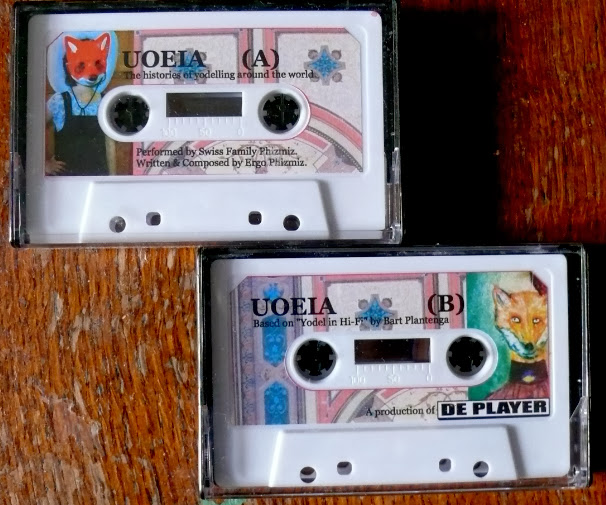 The cassette release of "UOEIA - the histories of yodelling" is now available to buy online.

This is the first of a new series of limited edition cassette releases by Ergo Phizmiz which will be released through his label Chinstrap Globlal Enterprrises Limitited.

Why cassette? In these days of total media saturation it seems to be becoming interesting to release music and art into the world that exists in non-digital formats, in small amounts of copies. This recording is not available anywhere online, and never will be. By buying cassettes from Chinstrap Globule Enterprisses Limmitted you are investing in little nuggets of unique information that only you and 49 other people in the world will have.

Yes, but still, why cassette and not vinyl? Oh, don't you worry about that. There are vinyl releases of other material also in the works on Chinstrap Globlall Enterplises Rimiteded. But cassettes are accessible and cheap to manufacture, and they make a nice sound when you shake them.

The cassette release of "UOEIA * the histories of yodelling" (Chintape01) is £7 including delivery. Thanks.


"Yodelling: the crack in the human voice when pushed to its limit, the plaintive wail of man against mountains. From the Pygmy tribes in the jungles of Africa, to the mountains of Switzerland, or the plains of the Wild West, to frantic Persian ululations and yelps, yodelling is a worldwide phenomenon that betrays its perceived image as a benchmark of kitsch.

In “UOEIA: Favola in Jodel”, Ergo Phizmiz presents the history of yodelling through music, masks, puppetry, collage, and animation. Based on the books “Yodel in Hi-Fi” and “Yodel-Ay-Eee-Ooo” by Bart Plantenga, and performed by Swiss Family Phizmiz, UOEIA invites you through time and culture, yodelling from cavemen to the modern age."
Posted by Ergo Phizmiz at 04:17