"ELEVEN SONGS" - The new album by Ergo Phizmiz, released 10/12/12 on Care in the Community Recordings 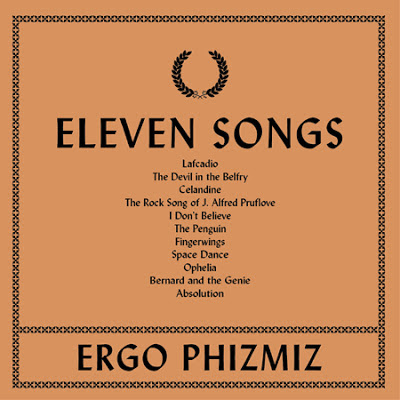 After the critical success of his 2010 debut album, Things To Do and Make, composer Ergo Phizmiz returned to a string of often award winning commissions for radio (BBC 3 and 4 and German national radio) theatre and opera before coming back full circle to the melodic three minute popular song form.
Earlier this year, over the space of a few weeks, and in typically prolific style, he refined and self-recorded a number of ideas that had been forming in his head while busy with other projects. Leaving behind the favourable comparisons to the 1960s Canterbury Sound or Vivian Stanshall of his debut and occupying less identifiable territory, the resulting Eleven Songs is a leaner, harder collection of songs that, as the title suggests, each stand in their own right. Although ostensibly the album consists of ten songs and an instrumental, Ergo considers Space Dance, a Sun Ra tribute, in the manner of Lieder ohne Worte, a song without words.

With no default mode of music making, but versed in so many, it would be fair to call Ergo a music conceptualist. But the purposeful construction of his writing and production methods are always in the service, rather than at the expense, of the pure joy of what makes a good song. Anyone who has seen Ergo perform will instantly recognise in these songs his natural theatricality, narrative drive, and a lack of pretension that allows music to be a shared experience. This is a highly addictive album that should echo the chorus of voices that acclaimed his first album with the lament that there aren't more pop musicians like this.
Posted by Ergo Phizmiz at 02:26