Tickets on sale for Ergo Phizmiz at Tête à Tête: The Opera Festival 2012

Tickets are now on sale for Tête à Tête: The Opera Festival 2012, which features the following Ergo Phizmiz events.... 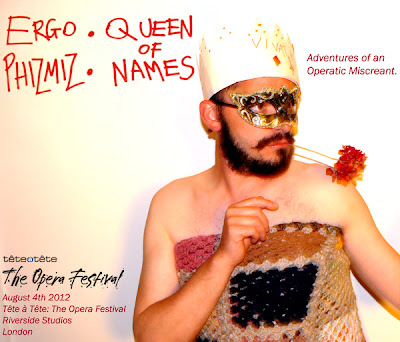 "A whirlwind tour through the life and work of maverick writer, collagist, radio-producer and opera composer Ergo Phizmiz. Performing excerpts from music-theatre pieces dating back to his early teens to current work-in-progress and experiments, the evening will provide a personal and kaleidoscopic overview of the work of one of the UK's most uncategorisable and prolific artists." 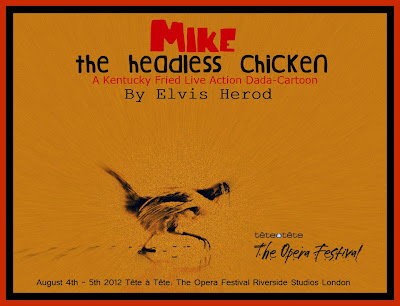 "One day in the mid 1940s in Fruita, Colorado, a poultry farmer was flummoxed by the continued survival of a decapitated chicken. Over the next 18 months Mike the Headless Chicken became a celebrity, touring the land as a wonder of nature, until an inglorious end in an hotel room (which can hardly be called untimely, since his head had died a year and a half earlier). This new Kentucky Fried Live Action Dada Cartoon opera by Elvis Herod, presented with The Gang of Rogues (returning to the festival after last year's controversial "The Third Policeman"), is a poultry-indigestion nightmare in garish technicolor." 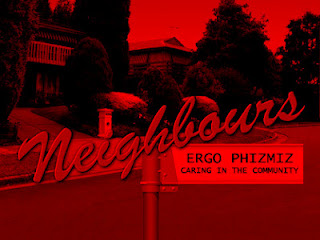 "Caring in the Community" A Lite Bite Opera by Ergo Phizmiz

"A charming and heart-warming tale of the unmitigated hatred that can develop between two people living next door to one another. After a long day at the office, a businessman's evening of watching the X Factor is ruined by the dulcet tones of the opera singer who lives next door."

Written & Composed by Ergo Phizmiz and performed/directed by Tête à Tête Opera, this short opera deals with a subject close to Ergo's heart: dreadful neighbours. Telling the story of the close-quarters neighbourly relationship between an office worker and an opera singer, it is the product of many years (unwanted) research.

This is one of Tête à Tête's "Lite Bites" programme, short operas that play in and around Riverside Studios during the course of the festival.


Do come along. This is always a genuinely unpredictable festival.
Posted by Ergo Phizmiz at 06:29

Email ThisBlogThis!Share to TwitterShare to FacebookShare to Pinterest
Labels: caring in the community, ergo phizmiz, mike the headless chicken, queen of names, tete-a-tete: the opera festival