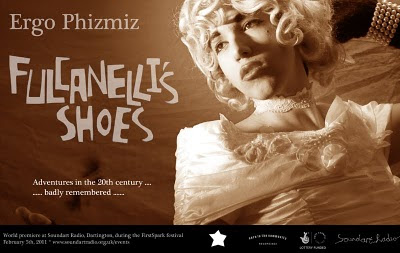 Reconsider your histories. We live in an age of holocaust deniers and the Da Vinci Code, the information age has become the age of fabricating the past. Reality has become something malleable, flexible to the needs and whims of whomever happens to be recalling what has already been.

"Fulcanelli's Shoes" is a response of sorts to this cultural phenomenon, by acclaimed artist, composer and writer Ergo Phizmiz. Weaving a tale with one foot paddling in truth, and the other firmly embedded in lies, the piece presents a rewritten cultural history of the 20th century, presenting the relationship between the artistic and alchemical worlds at the beginning of the century as the catalyst for the creative, scientific and political revolutions of the proceeding times.

Discover how Jean Cocteau could travel in time; the secrets of the Large Hadron Collider; hear a genuine alchemical transmutation of base metal into gold; find out how anagrams built the universe; learn how to fix anything that is broken .....

*
"Fulcanelli's Shoes" is presented as part of Soundart Radio's FirstSpark Festival, and double-bills with a special, in-studio performance of Ergo Phizmiz's opera about radio, magic, and the death of popular UK DJ Chris Evans "The Mourning Show".

Featuring an unforgettable and masterful central performance from Erik Bumbledonk as Chris Evans, "The Mourning Show" has been described as a punk-opera.

Telling the story of the gradual destruction of Evans on his Radio 2 morning show by three malevolent callers, this performance is an experience you won't easily forget.

As a flummoxed audience member put it at the London premiere in August 2010, "It's not only the big things that can become overwhelming".....

Vital Weekly described it as "an excellent opera, which brought plunderphonics to a new level".

*
If, due to geography, time, space, or what-not, you are unable to get along to the performance, you can tune in to the show live on www.soundartradio.org.uk
Posted by Ergo Phizmiz at 02:02