"Sticky White Glue" download time .... and then some "Codpaste"! 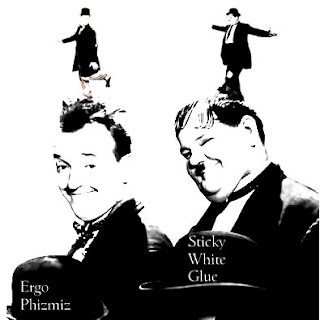 "Ergo Phizmiz's Sticky White Glue, a twelve-part series of sound montages--voices, music, and plunderphonic juxtapositions of the two--reminds us why radio has been described as "schizophonic," packing more disembodied sounds and voices than the ear can process" - Artforum magazine

This series "Sticky White Glue" first aired 2003-2004 on Resonance FM, London, and was repeated 2009 on Soundart Radio, Dartington. Segments of the pieces were also broadcast by Kenny G on WFMU. It is a fanciful play-around with the juxtapositions of instruments & voices with sampling and digital composition, and features as its main protagonists Stan Laurel & Oliver Hardy. 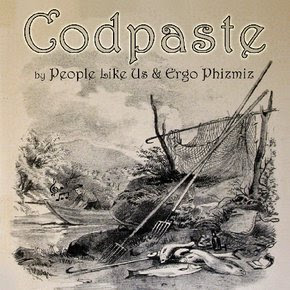 And then, blimeyblimey, we are are delighted to also present a permanent archive of "Codpaste" by People Like Us & Ergo Phizmiz.

"Codpaste" was a weekly podcast series in which the two artists attempted to compose collage music from the very beginning, in a "work in progress" style, attempting to open up the creative process. The theory is that it is rare to see compositions made from the outset, and usually the audience are only invited in once the piece is finished, done and dusted. These weekly programmes were expanded into a digital-only album entitled “Rhapsody in Glue”.