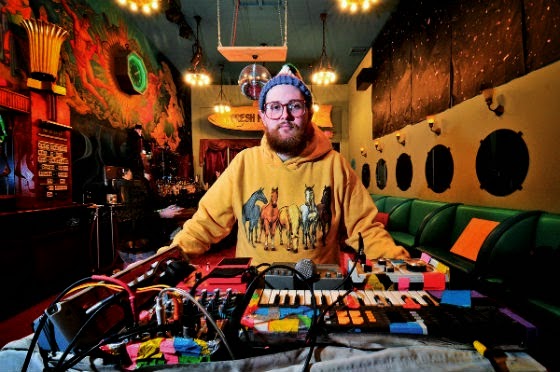 http://www.wegottickets.com/event/301155
DAN DEACON is an absurdist composer and electronic musician based in Baltimore, Maryland. Musically influenced by Devo, Talking Heads, Scratch Orchestra, People Like Us, Raymond Scott and Conlon Nancarrow, Dan's music strives to take modern experimental composition and electronic music out of the circle of the esoteric intellectual gangs and hipster communities, placing it into the more informal "fun time". Dan's music is about community and how to organise and inspire it. With the success of Deacon’s 2007 album ‘Spiderman of the Rings’, came an opportunity for the electronic-music iconoclast to increase the breadth and depth of his entire musical project. Deacon moved from self-contained computer music to orchestral epics. His interactive live show, honed in DIY spaces, was taken to museums and concert halls. He frequently expanded his performances to include a horde of side musicians. After a string of large ensemble projects (including 2009’s ‘Bromst’ and 2012’s ‘America’) Deacon started longing for the simplicity of the days when he did nearly everything himself. Now he’s back touring in support of a new album entitled ’Gliss Riffer’, an entirely self-produced record of almost all electronic sounds, which was “easily the most fun [he’s] ever had making a record.”

While ‘Gliss Riffer’ contains all the instrumental layering we’ve come to expect, the vocals are mixed with a prominence and, at times, a clarity that have never been heard on a Dan Deacon record before. Lyrical images of lightning, oceans, lakes, and roads crop up frequently as stand-ins for freedom and self-realisation. The tracks were started on the ever-changing landscapes that greet a touring musician. This new record also marks the first time Deacon replaced his digitally realised parts with analog synthesisers, giving Deacon the opportunity to experiment in the same way he did with strings and wind instruments on ‘America’. What makes Dan Deacon such an impressive musician has always been his aesthetic directness and ecstatic energy, all of this along with the heightened ‘focus on fun’ of his absorbing live shows has finally been translated onto an album. It’s a euphoria tempered by yearning and set in defiance of life’s nagging anxiety. “Happiness takes time,” we are reminded by tremolo vocals in the middle of the supremely danceable “Mind on Fire.” The bliss on this new album is well-earned.
http://www.dandeacon.com/index.html

“After a year of film soundtrack composition, music theatre, operatic works and horspiel for German national radio, composer Ergo Phizmiz has recently returned to solo performance (but with a new lightness). Allowing whatever instruments that he’s been lent on the day to dictate his sound, and letting his set find its own path, he strips songs from his broad oeuvre to a rough-hewn, often sublime, essence. The stage becomes his studio, an opportunity for us to witness a creative act beyond performance, improvisation in its truest sense. It’s this lack of a fear of failure and an absorption in his art that makes Phizmiz such a compelling performer and continually draws comparison with our most highly regarded artists from Robert Wyatt (The Guardian) to Scott Walker (The Wire).”