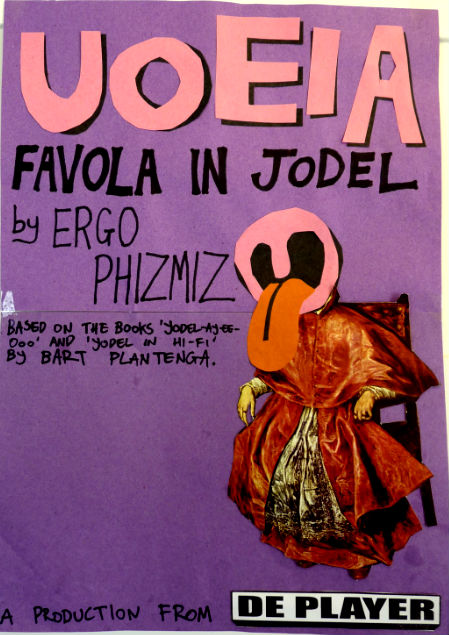 “UOEIA”, an operina on the histories of yodelling by Ergo Phizmiz, based on books by Bart Plantenga. In woodland school, two young foxes are presented with the history of the world through yodelling: the enchantment of the planet, the birth of civilisation, through to the attempted destruction of yodelling by church and state, all culminating in the rescue at sea by yodelling by Harry Torrani, the English yodelling cowboy, of Mercedes Gleitze, first lady to swim the English channel.

“UOEIA” is performed by what, appropriately enough, should be termed “Swiss Family Phizmiz”, in a mixture of vocalisation, performance, shadow-puppetry, masks, paper-collage, and animation, with a kaleidoscopic music score that twists between original acoustic composition and sound-collage from across the history and richly varied cultures of yodelling.

“UOEIA” is a commission of DePlayer, and will premiere at Operadagen Rotterdam on May 30th 2013, as part of the yodel themed evening “That Global Glottis”. 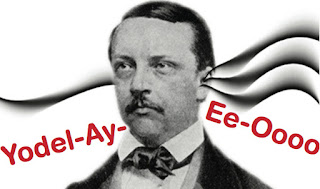 With "That Global Glottis" DE PLAYER presents a program poised on the cutting edge of where experimental sound meets opera and the phenomenon known as yodeling. The technique of yodeling basically accents that jolt of air that occurs during the rapid movement between chest and head voice. While opera singers are taught to polish away that vocal leap with glissando techniques, yodelers do the opposite: they highlight the breaking of the voice.
"That Global Glottis" features a reading, a film series, and a Late Night Performance Event that spotlights this unique vocal technique as global phenomeon. The program was developed in close collaboration with author bart plantenga, renowned for his books YODEL-AY-EE-OOOO: The Secret History of Yodeling Around the World and his recently published Yodel in Hi-Fi, From Kitsch Folk to Contemporary Electronica. Both books emphasize the fact that yodeling is found everywhere from pop to opera, not just among the Swiss and in the Alps but also among the African Pygmies, the Nazi Jugend SS, Bollywood star Kishore Kumar and countless others.