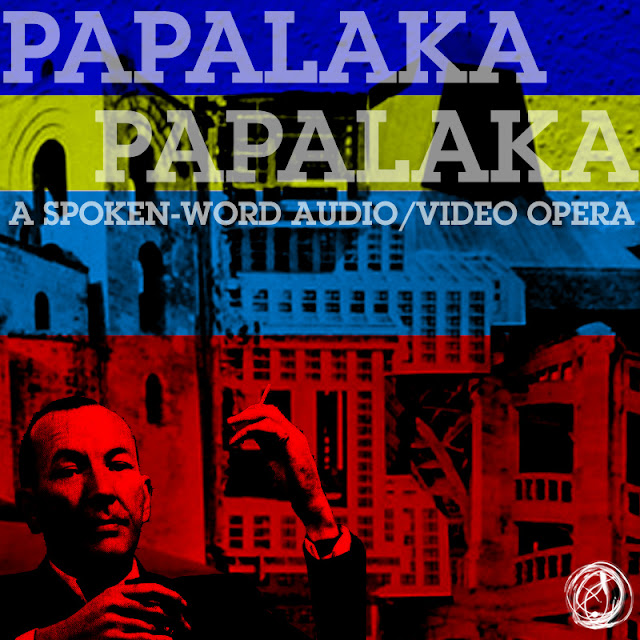 A spoken-word audio/video opera by Ergo Phizmiz, with text entirely snipped from the writings of Noel Coward. The audio is created from Ergo's collection of gramophone records, a sample from Monteverdi's "Combattimento de Tancredi", a wooden kitchen door, and Ergo's "Hallucination Duets".

N
When the curtain rises the stage is in darkness.
There is the sound of voices. Enter Young Man
followed by Young Woman. He turns up lights,
disclosing a comfortable little study with
a sofa, armchairs, books, etc.,
and the remains of a fire in the grate.

M
In January I went to Paris and breakfasted daily, curtains of wisteria
and serried ranks of snow capped mountains.

F
For the whole of the following year I did not work, my cough rapidly disappeared,
and then in a moment their colour and vitality faded.

M
Some little question of English grammar I bit her arm right through to the bone.

F
I drilled resonantly, a slight strain, you play exclusively in your mind,
I may add, that was not entirely free from superciliousness.

M
To this day we still meet occasionally and have a good time, but
the paths back into the past are long and tortuous, and new faiths,
like new policemen, were sick and tired of it.

F
My last link with familiar life, disappearing down the

M
Small miserable groups of people huddled in corners.
I had still one more battle. Cockie in his box,
Mother to greet us blind in a dirty kimono, nor could
I have chosen a more thoroughly unsuitable place.

F
Conducting a furtive, illicit detail, but the climax
was always the same.

M
I soon became bored and wanted to go home,
made up into dark little rooms and passages,
and one could see across miles of marshes,
a square edifice wearing perkily a pink corrugated tin roof,
falling to pieces,

N
The noise is deafening – the chorus in various travelling dresses
are clustered round the low counter, trying to get the baggage examined
quickly, and talking, and shouting.
Young Englishman strolls languidly in.

F
I was suddenly conscious-smitten by the sight of a poor old gentleman,
raspberried with the utmost fervour, although far from assured,
had at least been enough to procure me a dignified pose.

M
It was the result of careful thought, only for the sake of the salary,
seemed to be a static, over-cautious mania for travel and change,
but to me it wasn't foolish at all.


N
She takes the breakfast-tray from side table and rests it on her knees.
She proceeds to pour out coffee, she sips some of it
and then begins to eat a little toast. The telephone rings again.
She takes off receiver and speaks with her mouth full.

F
It is patronising, of course, to a certain degree,
but not consciously or disagreeably so;
I managed tactfully to erase some of the bloodstains.
As a new animal I received many surprising visitors in my cage.

M
My vision of myself at eight and twelve and sixteen is clear.
I know how I looked, of course.
Superlatives flew through the air, richochetting off mouldering midsummer.

F
Even Irene forsook me for a while.

M
I used to get packets of bacon on credit, restraining
the impulse to shoot at every shadow cast by the street lamp.

F
Her failure lay within herself, in her abrupt pride, and
sudden sharp intolerance, and her inability, when in certain moods,
to accept the small change of friendship, even from those
who loved her dearly,