"The Third Policeman" - Booking for the premiere at Tête à Tête: The Opera Festival now open! 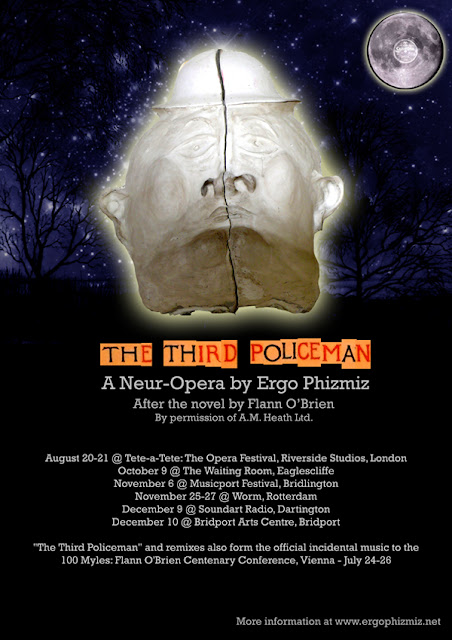 Oh yes. Booking for the world premiere of the neur-opera by Ergo Phizmiz of Flann O'Brien's "The Third Policeman", at Tête à Tête: The Opera Festival, Riverside Studios, Hammersmith, August 20-21 2011 is now open.

From “maverick composer” Ergo Phizmiz comes an opera on Flann O’Brien’s perplexing masterpiece. Part thriller, part comedy, part science-fiction, this radical adaptation combines stagecraft, animation, and distinctive, unforgettable music into an astounding composite for the ears and eyes. Expect bicycles, murder, atomic theory, typewriters, infinity, and sweets.
Book tickets for the premiere of this unique piece of music theatre here.
Download an mp3 instrumental montage of music from the opera here.
You will also be able to catch the new Ergo Phizmiz exhibition STATICOPERA, which is presented at Riverside Studios from August 1-21. 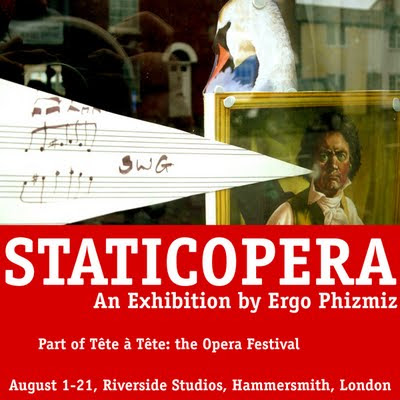 "The Third Policeman" is also essential viewing for any of you people with good taste who are fans of the brilliant Erik Bumbledonk (of Plushgoolash), Oblivian Substanshall, and Vulnavia Vanity, all of whom appear in the opera.
See you there........
Posted by Ergo Phizmiz at 06:37

Email ThisBlogThis!Share to TwitterShare to FacebookShare to Pinterest
Labels: staticopera, the third policeman