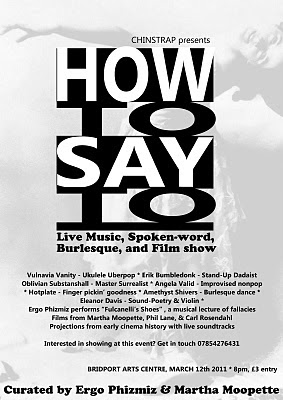 Howtosayto? One would expect this query to have a simple, one-dimensional solution. Life is, however, rarely so straightforward, and set to wreak the freshly odoured havoc of uber simple anti-simplicity will be a flock of artists, writers, thieves, raconteurs, chefs, composers, charlatans and burlesque dancers taking over Bridport Arts Centre on 12th March, 2011.

Showcasing work by creatives existing outside the fairly contemptible rotten gammon stench of the art and music industry/world, Howtosayto will present an evening of delights for your aural-retinal palates to savour like strawberries with sugar on a Summer's morning.

Baked in an immense pan by internationally acclaimed Dadachefs Ergo Phizmiz & Martha Moopette, the evening is a luxurious casserole of ingredients from across the UK, set to sizzle with world spices and just a dash of arsenic.

The sartorial elegance of Vulnavia Vanity will present tasteful slices of ukulele uberpop. Master Professor of Surrealism Oblivian Substanshall will fill your wanting mouths with spoken-word odysseys from the depths of Edward Lear's oven. Future-anti-pop-supergroup Angela Valid present a wordless cookbook of shatters and rattles, like a heavenly kitchen hurtling through space. Eleanor Davis will put a viola and her mouth into a pan, let them gently simmer, and see what comes out. Ergo Phizmiz will perform his new piece "Fulcanelli's Shoes", which includes no cooking but plenty of time-travel and a picture of Simon Cowell looking like a murderer.

The evening will also showcase some of the cream of contemporary film-making, including music videos and installations by the multi-award winning Martha Moopette, "Process No 18" by Phil Lane, a Duckumentary by Alexander Jones, and the UK premiere screening of the film "Slitscan Carnival" by Carl Rosendahl, one of the founders of renowned animation studio Dreamworks.

Bringing out the extra spices will be burlesque dancer Amethyst Shivers, who is of course likely to heat up the proceedings, a human Cumin, if you like. The evening will be compered by a comedy legend so underground he's permanently hot from volcanic activity (hence his red hair, the colour of a Rogan Josh), the great Erik Bumbledonk, who was last seen as a suicidal, birdlike imitation of radio DJ Chris Evans, bare-bottomed and jumping out a window to his death.

At the miniscule cost of £3, which now constitutes approximately 3 and a half chocolate bars, or two bags of pasta, or half a bottle of wine, you can't really go wrong. So do come along, wear something dapper or trampsy, whatever is your wont, clean out your eyes and ears (but with something non-corrosive, of course), buy a drink, and learn Howtosayto.