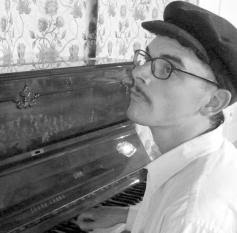 Ergo Phizmiz will perform acoustic versions of his most recent album Things To Do and Make that Mojo have said " sounds like Vivian Stanshall, Syd Barratt and Dali making merry" together with performed excerpts from other works such as The Mourning Show opera , more recently penned eccentric pop and the contextualising, both visually and culinary, of the Things To Do and Make sleeve artwork.

Multi-instrumentalist, composer and “musical man of the moment” (The Times) Ergo Phizmiz will present an informal seminar introducing his diverse practice followed by a performance of solo interpretations of his most recent album Things To Do and Make.

The event will also take the opportunity to show rarely seen images of Stanley Green, the dietary reformer, pamphleteer and regular fixture on Oxford Street between 1968-1993 who formed the inspiration for the sleeve art of Ergo’s album. A small selection of Green’s strict diet will be available to sample during the break and Ergo will perform a specially commissioned song about this London eccentric for voice and recorder, the instrument Green played in rare moments of time off.

Ergo Phizmiz first came to attention for his unique approach to sampling and sound collage for which he is noted in John Peel’s autobiography and his ability in numerous other genres has also become highly regarded. Ergo recently received the Special Mention at the prestigious Prix Italia for a BBC radio 3 commission, has written a score for a Christian Marclay film and received encouragement from Simpsons creator Matt Groening who claims to play his music while at the drawing board. In the past couple of years Ergo has begun to write operatic works again, something he did as a precocious teenager, but his first foray into the “eccentric pop” of Things To Do and Make marks another new direction. The combination of his unique absurdist humour and inventiveness within a pop song structure has gained widespread recognition from national broadsheets and leading music press with the Guardian compelled to say “we can’t decide whether he’s the new Viv Stanshall, a young Eno, a British Zappa or a replacement for Frank Sidebottom” and Mojo to proclaim him as an up and coming songwriter to watch.

Email ThisBlogThis!Share to TwitterShare to FacebookShare to Pinterest
Labels: care in the community recordings, ergo phizmiz, live, the mourning show, things to do and make