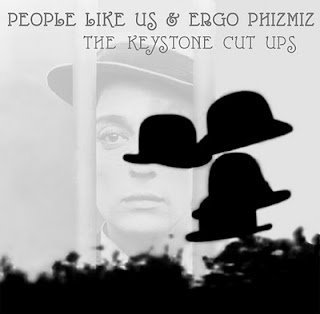 "The premiere performance of the new commission from artists People Like Us & Ergo Phizmiz opens the Festival. The Keystone Cut Ups is a live performance that combines video-collage with an original musical score, created using sampling and live instrumentation, to explore the aesthetic, contextual and stylistic relationships between early silent-comedy and early avant-garde cinema.

Using the influence of slapstick comedy on the Surrealists as a starting point, the piece takes us on a madcap journey, combining the techniques and popular imagery of the two genres.

The Surrealists took to cinema easily, using it as a device to show their disdain for established artistic tradition. In their quest to liberate the imagination, they believed that the process of juxtaposing unrelated elements would create images of great emotional and poetic power. Thomas Pynchon wrote, “one could combine inside the same frame, elements not normally found together to produce illogical and startling effects”.

In early silent films the actors often came from the Vaudeville tradition. They used flamboyant body language and facial expressions, a style suited to melodramatic comedy, which was popular at the time for its escape value. The earliest films were influenced by the presentation methods of theatre and the stage sets and inclusion of orchestras and dancers were motifs of entertainment that stuck throughout cinema’s evolution.

The Keystone Cut Ups employs a surrealist approach, presenting images side by side on the screen at the same time. It includes the everyday objects, such as top hats or umbrellas that were utilized as props by both slapstick comedians and the Surrealists, as well as reflecting the concerns of the day like mass industrial automation, and the stories made popular through film at the time, which included clunky monsters and the fantasy of trips to the moon.

The work reflects simultaneously on the histories of these two distinct schools of cinema and how they inform one another, whilst producing a work whose structure and format is informed by both silent comedy and early experimental and avant garde cinema." - Iain Pate

Don’t miss this unique event, followed by a drinks reception in the Maltings’ Stage Door Bar.