We are utterly delighted to announce a rare improvisation set from Ergo Phizmiz in co-operation with the Latvian songbird and Renaissance lady Margita Zalite. 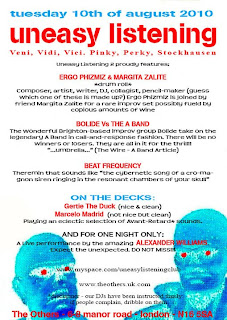 After meeting as part of Iuliana Varodi's Transymusic project in Romania, Margo and Ergo (who inexplicably have not yet played under the moniker of "Mergo") have collaborated on lots of unreleased material, including the children's broadcast pieces "Amitini" & "Neredzema Margo". Margo also appears as one of the callers in Ergo Phizmiz's opera "The Mourning Show". This is the first time since 2007 they have played music in a room together.

This time, UNEASY LISTENING will be taking place at THE OTHERS,

on tuesday the 10th of August 2010!!! (yes, even the date is exciting! No, really... that night there are going to be some amazing meteor showers!)


PLUS!!! LIVE PERFORMANCE BY THE AMAZING:


On the decks: Gertie the Duck & Marcelo Madrid

Email ThisBlogThis!Share to TwitterShare to FacebookShare to Pinterest
Labels: beat frequency, ergo phizmiz, gertie the duck, margita zalite, the a band, the others, uneasy listening