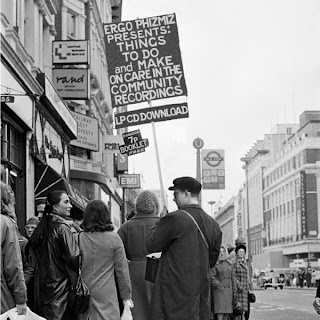 From Care in the Community Recordings:

"Composer, multi-instrumentalist and broadcaster Ergo Phizmiz first came to prominence for his experimental electronica for which he is noted in the autobiography of the legendary Radio One DJ John Peel. Since then he has broadened his musical horizon to collaborate with The The, score a film for international art star Christian Marclay, undertake a growing number of BBC radio commissions and write operatic works. It's unsurprising then that he has attracted a 'serious' music audience (Michael Nyman being in attendance at Ergo's last London show), however, the predominantly acoustic Things to Do and Make is Ergo's first foray into what could be called 'Eccentric Pop'. Exuding the energy and theatricality of his live performance, that can see him flit from grand piano to drums via trumpet or self-made instrument and back, it marries his characteristic sense of the absurd, recalling Vivian Stanshall and the quintessential art school band ,The Bonzos, with an inventive and melodic folk-pop. The first single from the album is the Lennonesque anti-love song 'Late' configured for a one-man band: it is easy to picture Ergo with a bass drum strapped to his back, strumming a guitar with a tin whistle at the ready. As with all Ergo's output this album conveys his sense of pleasure and fun in making music but with this new found pop sensibility, it's an experience he should be sharing with a much larger audience from now on."

"One of the most inventive composers around ... a musical equivalent to Chris Morris" - BBC Radio 3, Mixing It

"A marvel of sonic experimentation ... Ergo is an inventive mind" - Comfortcomes.com

Email ThisBlogThis!Share to TwitterShare to FacebookShare to Pinterest
Labels: care in the community recordings, eccentric pop, things to do and make