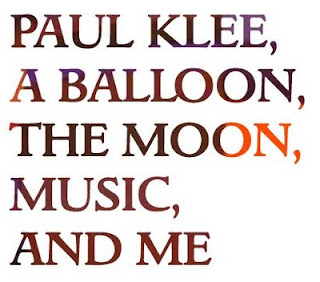 BROADCASTING 2130 GMT, on BBC Radio 3, Saturday December 5th 2009, and on BBC iPlayer for one week after broadcast.

A fantastical encounter with Swiss painter Paul Klee, in an imaginary Klee-world of twittering machines and dream landscapes, singing colour polyphony and scribbling violin. Composer and writer Ergo Phizmiz wanders through Klee's paintings in the company of their creator, evoking their vivid colours and whimsical humour in intricately composed soundscapes. Klee takes Ergo on a hot-air balloon ride which, like a magic carpet, miraculously flies them to Tunisia, the land where he 'became a painter'. Their voyage also passes through paintings of strange gardens, mountain carnivals, and abstract colour gradations, before they finally ascend to the moon, a dream-world populated by lunar monkeys, peculiar birds and trees bulging with seeping paint.

This programme’s music and sound-design was entirely composed by Ergo Phizmiz, who also wrote the script and plays himself. The role of Paul Klee is taken by Felix Kubin, also a prolific composer and radio-play maker, who lives in Germany, and Klee's violin is performed by composer John Matthias, winner of the 2008 PRS New Music Award and collaborator with artists including Radiohead, Coldcut and Matthew Herbert.

Go to Between The Ears