"The Snow Flea" - Premiere in Marseille 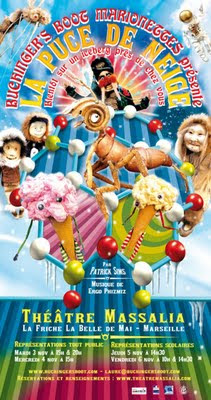 "At the present day magnetic North Pole, a forever wandering location, the tiny snow flea, Keruguq, is hiding out from Baron Tugar Von Torngark, a mean flea circus ringmaster who wants to turn Keruguq into an ice cream preservative. The Baron, accompanied by his sidekick, Wayne, a greasy French-fry eating seagull, operate a foul ice cream industry powered by the fleas from his circus.

Meanwhile, an old, hiccoughing Inuit shaman named Simmiktartoq, vows to protect Keruguq and teaches his over-imaginative children how to “eat the weather”. Keruguq gets lost from his home when he falls down a great opening in the earth and suddenly finds himself at the other end of the world - in the Antarctic and desperate to return. Along the way home he meets a host of eccentric animals, insects and micro-organisms who help him on his return, sharing meals, adventures and stories. He eventually returns back to the magnetic North Pole and things have turned upside down. Transforming robots and Inuit totem pole dance, costumed children fly, fleas, worms, lice and mosquitoes have a jazz band jam session under the northern lights! The snow flea is a story of science fiction fantasy mixed with Stone Age mythology and real geophysical anomalies! Part flea circus, part ancient Inuit ice cream ceremony, a tragic-comedy puppet opera for children of all ages!"