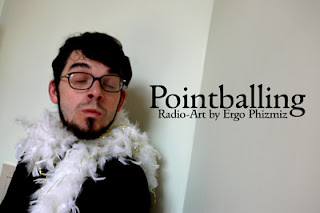 Tune into The Verb on BBC Radio 3 tonight for the second instalment of Ergo Phizmiz's "Pointballing". In a Victorian themed special of The Verb, Ergo presents a radiophonic adventure in spoken-word, sound-design, songs, and music, set during the reign of old Queen Vic - a kind of puppet-theatre for the ears.

As part of BBC Radio 3's Mendelssohn Weekend, Ian MacMillan's weekly programme dedicated to poetry and the spoken word explores the literary life of the 19th century, from its grand visions and Romanticism to its more curious and eccentric writers. Novelist and The Verb regular Toby Litt talks about some of the lesser-known poet laureates of the period, including Robert Southey, William Wordsworth and the unfortunate Alfred Austin, Tennyson's much-mocked successor, whom Robert Browning dismissed as the 'Banjo Byron'. Ergo Phizmiz presents some 'pointballing', his series of eclectic experiments in sound and language, this time with a Victorian flavour and in the spirit of the nonsense poetry of Edward Lear and Lewis Carroll. And novelist Gregory Norminton, author of Serious Things, reads The Chronic Omnibus, his new Wellsian tale of how the Victorians saw the future.

And exclusive to this blog in mp3, a sneak preview "behind-the-scenes" of the production of Pointballing, featuring recordings from the foley session joined by The Travelling Mongoose.

The Verb is on at 9.30pm (UK time) on BBC Radio 3, and the show will be available for one week afterwards in BBC iPlayer.
Posted by Ergo Phizmiz at 03:46