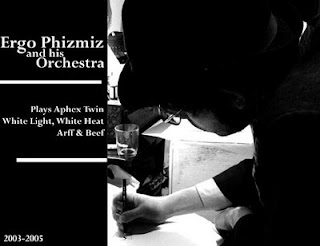 For the first time, the complete recordings of the "Ergo Phizmiz and his Orchestra" project are presented in their entirety, free of charge, for your delight and delectation.

The project comprised covers of pop music from various meanings of the word 'pop', comprising an album of reinventions and interpretations of the music of Aphex Twin, a cover of the entirety of the second Velvet Underground album, and finally a set of versions of 90s and noughties R & B classics, from Destiny's Child, through Kelis, Missy Elliott, and trousersnake himself.

* * *
All tracks arranged, performed and produced by Ergo Phizmiz

Vocals on "Honour Roman Nip", "Here She Comes Now", "Survivor", "Get Ur Freak On", and "(Doo Wop) That Thing" by Martha Moopette

Vocal on "The Gift" by Dirty Duck

"Arff & Beef" & "White Light, White Heat" previously released as a limited run on Womb Records, given away with the first 150 copies of "Nose Points in Different Directions"

Thanks for listening, enjoy!